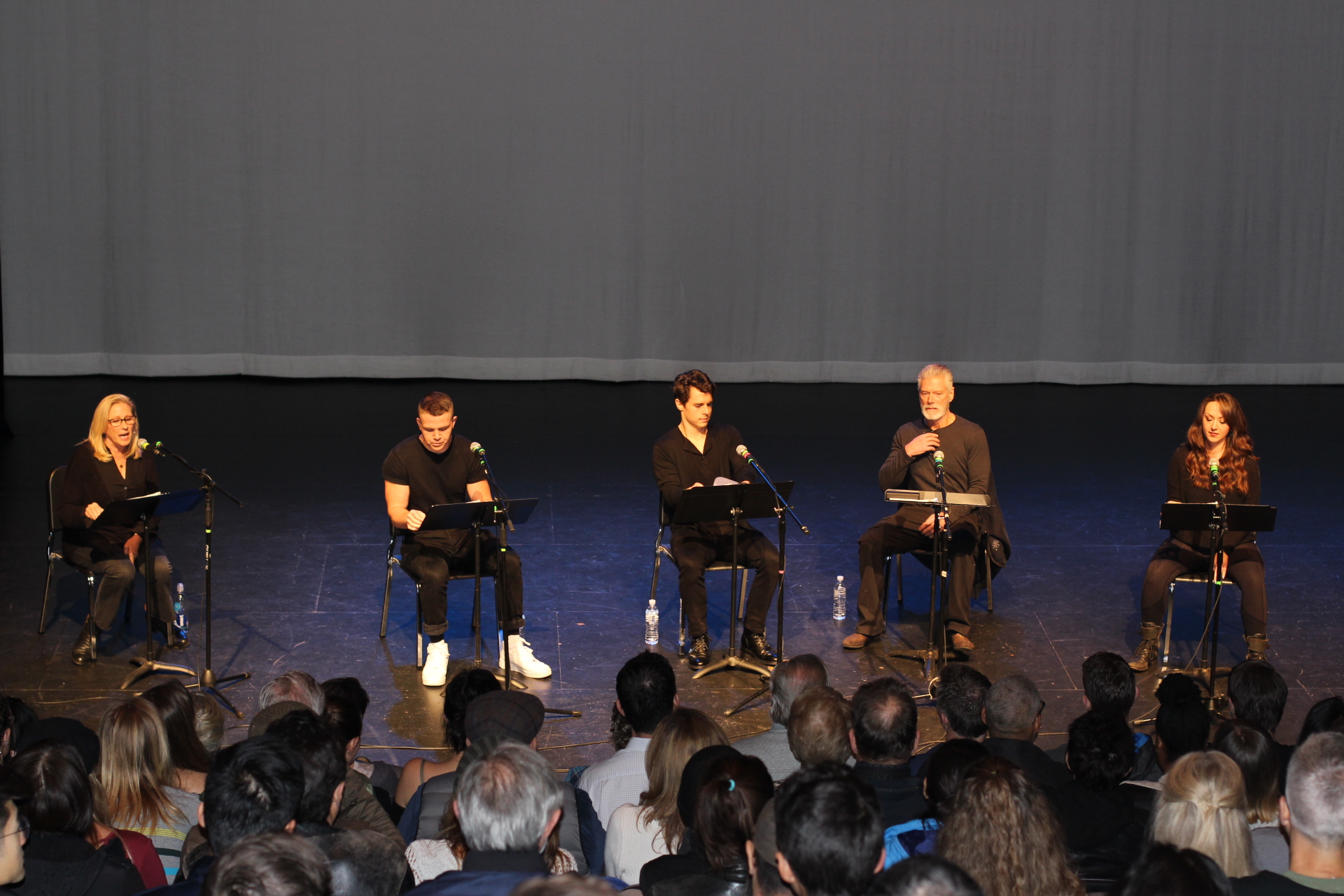 The staged reading went so well the actors received a standing ovation! They gave it their ALL. Stephen Lang gave a performance which was painstakingly real–almost too painful to watch while still landing the punch lines. Jamie Landau was the perfect Danny: scared, smug and sarcastic. Karen  Gregan read the stage directions like a pro. Playing a variety of characters were the fantabulous actors Jess Moss and Cooper Ramsey. In response to this talented ensemble, the audience laughed at all the right times and was surprised and hushed as the actors turned the wheels of the story. They were my dream cast. All of them. 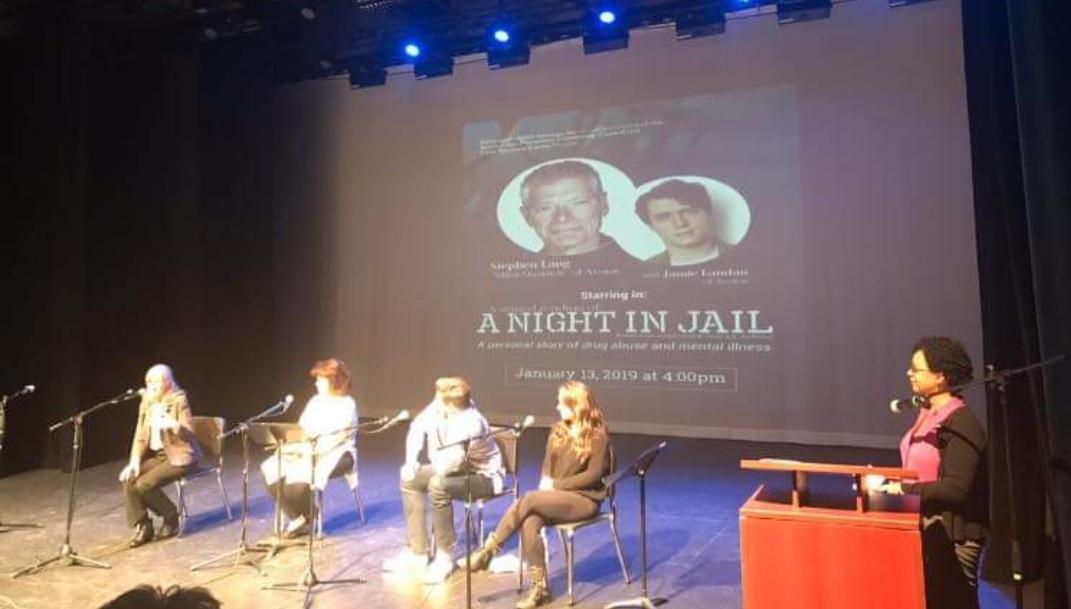 Directly following the reading we had a panel discussion about the association of teen substance use (MJ in particular) and its association to mental illness. Three of these panelists have great significance to me, personally. Lori Robinson of Momsstrong.org has been a champion of mine since we published the book. She printed the first article I wrote on her site, and she also . Dr. Miller is a neuroscientist and schizophrenia researcher. Her work was part of the inspiration for me wanting to share my brother’s story. A third panelist, Jess Moss, and I met at a prevention meeting. I discovered she was an actress from Seattle (where the story is set) and that she is in recovery. We started a conversation which led to this reading! Lastly, Dr. Hanlon represented Clear Recovery very well.

If you missed the event, no worries. See the full panel discussion here! 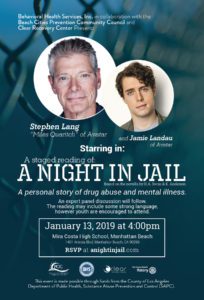 The amazing actors of the film, Avatar, Stephen Lang and Jamie Landau, starred in a reading of an adaptation of A Night In Jail. Other stars included Cooper Ramsey, Karen Gregan, and Jessica Moss. What a terrific cast! After the reading, we had a panel to discuss the association between teen marijuana use and schizophrenia (and other topics related to teens and substance use and addiction and mental illness). This free event was sponsored by Behavioral Health Services, Clear Recovery, Hermosa Beach Rotary Club and Eric Smith and Faye Morse, Manhattan Beach Lazy Acres and Hawthorne Costco. So grateful for the support!
Location: Mira Costa High School, 1401 Artesia Blvd, Manhattan Beach 90266
Time: 4:00pm to 6:00pm

“After reading A Night in Jail, a riveting story based on true events, I just had to learn more about the inspiration for the book and the topic in general.”

“Swan is using the book as a platform, having discovered articles that support a connection between drug use and schizophrenia.”

I feel so fortunate to live in a community where the local paper is this supportive. K and I have great appreciation to The Beach Reporter for publishing this article.

“One day, marijuana is going to be legalized and this ‘punishment’ will all be for nothing.”

Grateful to receive this rating from the terrific book review site–Underrated Reads! At Underrated Reads, they seek out “literary gems” that don’t have the same exposure as books which are traditionally published. We really appreciate this kind review!

A NIGHT IN JAIL: A story about drugs and mental illness, inspired by true events – H.A. Swan, K. Anderson
Posted on February 20, 2018 by J D Jung
(Reviewed by JD Jung)

Yes, getting pulled over while high was the first “Reality Rush”. The second one came when his parents refused to bail him out. Eighteen year- old Danny had plans to become a lawyer. Now, he’s sitting in jail with Captain, a delusional, drug-addicted, homeless man.

In his twenty-four hour stint in jail, we learn a lot about Danny‘s life as he reminisces in between Captain’s rants. Danny wondered what kind of family Captain came from; that is, how did he wind up homeless and so boring? Yes, Danny thinks he is “boring” because “Captain’s life is all about hustling money to get high.“

A Night in Jail is not a “scared-straight” story. At barely one hundred pages, it’s a riveting tale based on true events. Readers will be hooked at every page until the surprise ending.

Most importantly, it’s daring enough to bring up a topic that very few will discuss: the effects of marijuana use on those with a predisposition to mental illness. A family history of mental illness is often unknown and I personally know those who didn’t see links until tragedy struck.

For that reason I encourage adults to read this, no matter what their views are on legalizing drugs. Then I think that they will want their teen and pre-teenage kids to read it also. It will open up an engaging discussion for both adults and children.

“This is a heart-breaking account of what families go through when a member becomes addicted and is unable to see that he or she needs help to enter recovery.”

To see The Marijuana Report newsletter with the article reprinted, click HERE (scroll down, it’s the third article).

You can also read the article in the Backstory of this website.

* The Marijuana Report is a weekly e-newsletter published by National Families in Action in partnership with SAM (Smart Approaches to Marijuana). 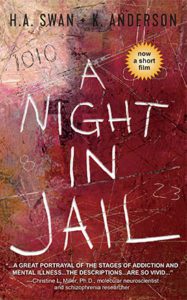